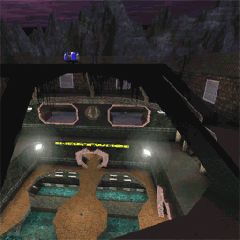 Kaalpek in the native Skaarj language means Forgotten, originally one of the first DM arenas this place was long forgotten when the games popularity grew, now 600 yrs later Kaalpek is reborn. Designed as a 1v1 arena but made large enough for 6 this arena was designed for the tactical minded player and gives lots of routes to choose from, it may run sluggish on some older pc's but most should have no problems now as this map was made about a year ago. Enjoy.