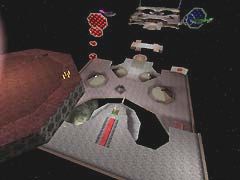 Q3A Space CTF (Q3CTF4) is by far my fave Q3A map and I've seen several UT conversions of it none of which really captured the fast pace and spirit of the original. Almost of none of the conversions so far have BOT support. I made several attempts over the past 6 months to convert this by studying the orignal closely. Finally, staying up late one night with my sick kid, I thought I'd just try to wing a map with a "similar" theme and paths as the original and this turned out to be more like the original than any conversion of it I have seen to date. With the TL in UT, the smallness of the bases seemes a little too small, so the base platforms have a little more playing area to make it less of a spam fest. And I've added some little tricks to the map to make the bots navigate better on it. And I have to say, the bots in this map, apart from suffering from some Jump Pad retardation, play this map wickedly.