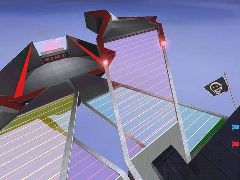 This being my first map intended for public release, I chose Facing Worlds as a strategic template: multiple routes that are exposed, inclined, and suspended in space. From there, I devised a geometric pattern of intertwined ramps, each with its own purpose and strategic potential. In order to prevent the flow from being too open-ended, I chose to put flag base entrances on the outer ramps, and flag base exits on the center ramps, with the only connection located at a center "crossroads."

Being rather inclined against defensive maps, I built offensive advantages into this map and limited the number of potential camping locations to the minimum required to keep players looking over their shoulders. I included very little sniper rifle ammo and excluded the Minigun in an attempt to keep combat 'close-in' despite the size of the center ramp arena.