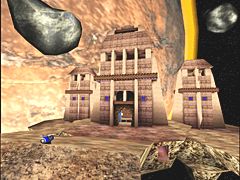 Mars in the very near background, and Earth in the very far background. The background spins. CTF-Face2000 is a level I decided to build because my brother always played CTF-Face and loves it, though he wanted more levels like it.

- fixed lighting issue in underground tunnels, and is now more realistic
- reconstructed steps in flag room (they caused node problems)
- futhur improved bots:
- deleted two defense spots in each flag room
- added one more defensive spot in each flag room in a more strategic area
- sniper bots are better than ever, they now know where "high-traffic" areas are
- added version number in screenshot
- bots should now stop jumping to ground from atop the tower (they still did that occasionally)