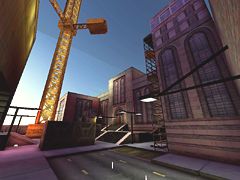 Liandri had run into trouble with finances while constructing some new arenas. While Sponsorship worked due to corporate advertising, this one failed due to miscommunication and lack of understanding between executives. Thus with half the construction complete, the project was cancelled.

Tournament champions were not to be deterred. Seeing the half-finished arena, they began to sneak in at night, to play grudge matches against each other, and to hone their skills for the tournament. Loque, being a biblical scholar, named it Shinar, after the land where the Tower of Babel was built. Since nobody wanted to cross him, the name stuck.