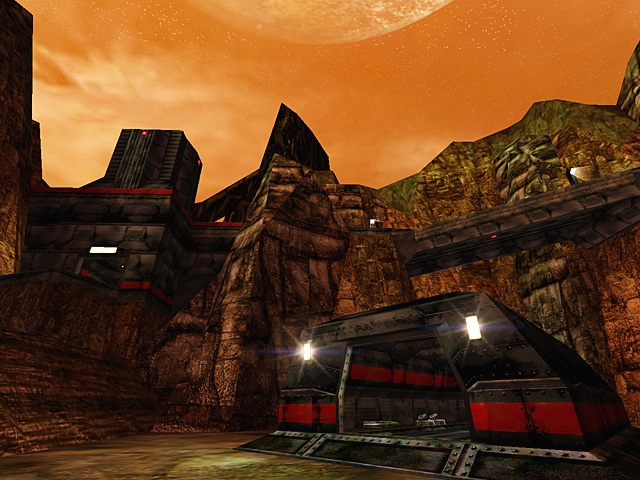 Warning: High polycount! This is one of those maps that makes your jaw drop :)

The hunt for extraterrestrial life has been a crusade of many Earth governments since deep space travel had been possible in the mid 21 century. In 2248, a Red Army deep space vessel on its routine mission though the Andrian system, discovered a life reading on nearby planet "ALPHA 3". This planet had already been deemed "A Dead Planet" by many past probe missions, which made this information seem strikingly odd. A few weeks later a Red Army research team was sent to check out the phenomina. They discovered a large alien organism almost resembling a Plant, however much different. In the first studies, they observed that this plant can grow up to 24 feet in one day if conditions are right, and also it secreated a very strange living fluid.

As months followed, many more discoveries were found. First, the plant is not only growing upward, but also growing deep into the planet, almost like a root system, but much larger in scale. The fluid seems to be impervious to heat or cold. This didn't surprise the scientist since the planet can be 150 degrees during the day, and -40 degrees at night. By accident one day, a vial of this fluid was dropped, spilling onto a scientist's hand. He noticed a tingling sensation and a cut on his arm suddenly healed within minutes. Further studies had proven this fluid to be the "Cure all" in modern medicine. Not only did it heal wounds, but also would wipe out diseases, and rebuild cell tissue. Trying to keep this information secret, the Red Army government set up a base on the planet and started tunneling the terrain extracting this cure all medicine which was named "The Life Drug".

Word however got out about this discovery, prompting other Earth powers to ... (continued in the included readme file)