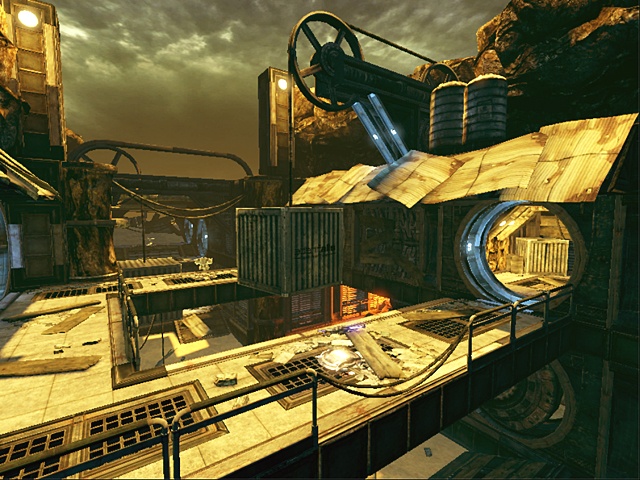 After the $#*! Hit the fan, Rustee set up shop in an abandoned military base. "Rustees Post-Apocalyptic Arms and Munitions" he calls it. The city folk don't know them big words, but they know them some guns, and Rustee provides.

This level took longer than I had hoped, but that's not due to the time spent in editor. The level was almost finished in December 2009 when I put it on hold, and in January 2010 my computer broke. It took a few months to diagnose the problem, order new parts, find out that those were the wrong parts, reorder, and fix the problem. Now that my computer has been running again, I decided to finish the level.

The theme, if I remember correctly, was inspired by the wear and tear of Borderlands, a game I had intnended to buy (but didn't and still haven't). Of course, Unreal Tournament 3 has a grungy look that is much different from Borderlands, so similarity is little at best. Most of the meshing was done in 2009 and no longer represents my current ability. The lighting was finished in 2010.