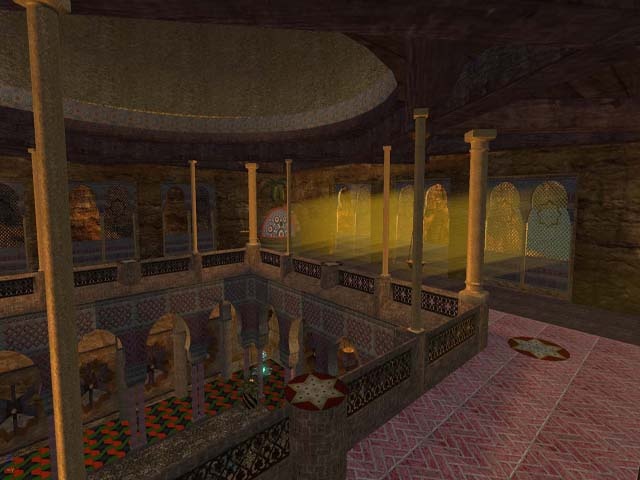 This is the UT3 final release of Mosque, an extremely large indoor/outdoor map. It was conceived and originally created as a Bombing Run level for UT2004. In the UT3 version, there are actually three (3) maps in the package:

OK, why does Warhead's mod have to be installed to play KBR_Mosque? It's because of the PathNodes. Warhead put a lot of effort into bot behavior, modifying team and squad AI. This work included a subclass of PathNode (BRPathNode) which contains a lot of additional information used by Warhead's code. KBR_Mosque doesn't need or use any of that additional info, but because the starting point for creating KBR_Mosque was to copy and duplicate BR_Mosque, all of the PathNodes in KBR_Mosque started out as BRPathNodes. Since there is no way to script a replacement of each and every BRPathNode in the map with an ordinary factory PathNode, and since there are over 1000 of them, the work involved in doing all the replacements manually was tedious, error prone and more than I was willing to accept. Consequently, all the PathNodes in KBR_Mosque are actually BRPathNodes, and so the file BombingRun.u from Warhead's mod must be installed to resolve the references. This is also true for CTF_Mosque. No big deal really.

Warning - the first time (and ONLY the first time) you load one of these maps, it can take up to five minutes to load. After the first time it's MUCH faster. Please be patient, start the load and go have a cup of coffee ;-)