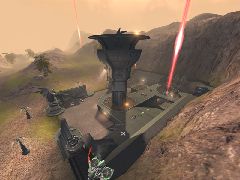 Titan Onslaught has changed yet another map to suit their 32 player gamestyle. ONS-Torlan-32p is now optimised for large scale battles with player numbers ranging van 8 to 32. The changes were made over 6 month's course through several betas that were running on the Titan server.

The following has been changed:

- 2 manta's in the base
- The Tank has been moved from outer nodes to the base
- Addition of a Paladin in the base
- A Cicada has been placed at the Raptor spawn in the base
- A Raptor has been placed on the base roof, the Lightning Gun was removed
- Addition of a new (chokepoint free) nodesetup to accomodate 2 new nodes that were added to the east and west parts of the map's centre line
- The Redeemer has been replaced by a Target Painter
- The new nodes have the following vehicles; a Hellbender, a Scorpion and an Energy Turret
- A Hellbender now spawns in stead of the Goliath at the corner nodes
- The manta at the original primary node has been replaced by a scorpion
- The base now holds four Energy Turrets
- The ramp at the base, popular for spawncampers, has now been electrified
- Several tweaks to the weapon lockers

Although some of these changes may seem rather extreme, they have been thought over and tested extensivly and were important to keep the flow of a 32p match. More importantly, you know have a chance to get back in the game when you lose the primaries.

If you would like a more detailed description of the changes that were made, please check the guide that came with this map.