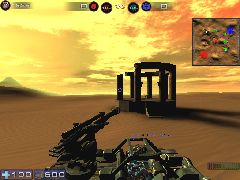 ONS-Glan-SE is a rebuilt version of ONS-Glan, this map is based on different principles to ONS-Glan which is why it is a different name. The map is an open desert with powernodes which have decent cover, in total the map has 23 vehicles and 5 powernodes (excluding the 2 bases) this is an unfinished version and I would like to hear peoples suggestions and constructive criticism so I can improve the map. It does have balanced combat and a range of vehicles but no leviathans because I dislike them. Enjoy !

P.s. The fog on the screenshots blends in when playing it looks like that because UT2004 brightens the screen, also you will need the editors choice update in order to play this map.