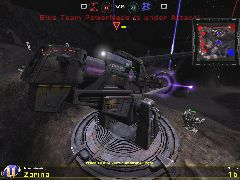 This is my first publicly released UT2004 map. Medium sized Onslaught map with seven nodes in a nested-circuit configuration. Node layout is pseudo-symmetrical, and bases are asymmetrical (I have done quite a bit of work to balance the two sides).

Both bases are on the east side of the map, with the node layout going to the west side. There are two main routes between the cores, one of which only seperates the cores by two steps. This proximity provides for an intense, pitched, battle over these two nodes for most of the game.
However, there is encouragement to move away from those two nodes. As you go further away from the bases, nodes get more powerful vehicles than the two nodes closer to the bases.

Ingame blurb:
A forgotten rebel faction was once based in this remote compound, besieged by the NEG and ultimately defeated by the rebel commander's critical mistake. Now battered and worn, Tournament warriors battle over this compound. Will you become victorious in this Onslaught, or fall victim to your own Dark Folly?