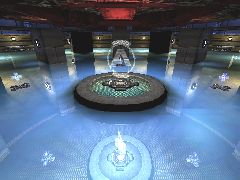 The Gladiator Arena 2 has been converted for the Double Domination game type. Drenolium blocking shields create a whole new gaming experience. Can you dominate the arena?

Took the same layout from GA2 and changed the main play area. Decided that I wanted both domination points on top of one another, but couldn't work out quite how that would play. Hence came up with the "Drenolium" shields, which allow for the player to walk on, but also allow weapons fire to go through. This setup creates a different faster game play for Double Domination.