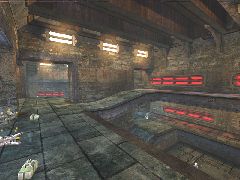 The Metus refinery was known to its workers as being the most desolate, bleak, and soulless environment imaginable. Located on a small island in the middle of the vast ocean, there was no communication with the outside world. Workers would spend their entire lives there, often going insane from the incessant hum of rusty machinery. There remain now only two workers, and one emergency escape pod. Only a fight to the death will determine who will be free from the torture of Metus.

The floors have been swept of bones and blood. The machinery has been cleared. The weapons have been unpacked. Fight for your escape.

This is a very small, tight 1on1 map. The visuals were kept simple and clean to avoid hindering gameplay. The high level of interconnectivity allows plenty of fast-paced action and trick-jumps. Expect some very high-scoring games in this map.