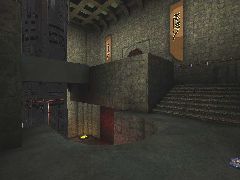 This is a remake of Q3tourney2 - The Proving Grounds for UT2004. This was probably the largest of the 1v1 maps from the game, but it still works for 1v1. Has the same layout, rocket, flak, and lightning gun for the arsenal, and of course bot support. No Hunter to fight though.