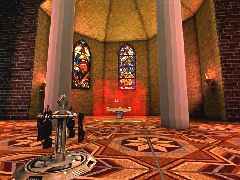 This map is a 2k4 remake of the map DM-Bonifatius, witch was released for ut2003, long time ago. Because I find it a good map and the 2003 version was very basic, I decided to convert it for UT2004. This is version 3 witch has a proper zoning and all bugs from version 2 are gone. You do not need the CBP packs anymore. The packages churchmeshes and churchtextures are the same as in the v2 version.

It is a typical dutch church, with a big surrounding/graveyard. The church itself is big and there are 2 lift,s to transport you to the upper churchlevel. In this church you will find a lot of hiding places where you can go by teleport. Also you can jump high into the churchtower by jumppad,s. High above on the church you can find ion painters, they only work outside. Almost all weapons are present, also ONS one,s. A redeemer is shown, but gan you get it ? Find out !

It's a real funmap and it is running fine now, your FPS will be a lot better! A big improvement of bloody_Bonifatius][v2. Have fun with it.

Changes in version 3 from version 2:

* Made a secret room where you gan find the supershock rifle.
* Built a special place where the coffins are laying.
* Redid the complete lightning.
* Also put sounds into the map.
* Removed some off the emitters, map runs better now.
* New layout of the weapons, there is now 1 redeemer and 1 supershock.
* Made new outershets, which are much better made.
* Put also new staticMeshes in it.
* Redid some off the textures.
* Skaling of the furniture is better.
* Map is properly zoned, means better framerate.
* Liftbug fixed.
* You can now walk all the way around the church.
* Blocking volumes are added, also around outershets.
* Special thanks to Fliegenklatsche, who did the zoning and removed all the bugs!

I have also made a smaller, indoor version of this map: DM-2on2-Bonifatius][v3.