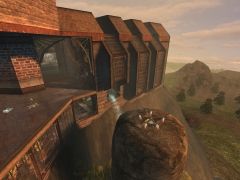 This old nature-museum had seen better times. There were not as many visitors as used to be 10 years before. Then, a gas explosion completely knocked out its budget, the museum had to be sold, Liandri bought it and it became a Storage for tournament items, until the tournaments got bigger and bigger. It became too small and was turned into an 1on1-Arena.

Well, another 1on1-Map with bricktexes all around the map... But it looks good and plays good, though it's a very tiny map and I had serious problems placing items without getting it too full :D.