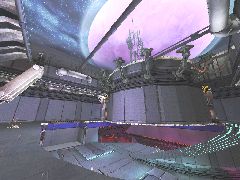 "This is no mosaic crafted of bits of colored plaster - but it is a work of art. Constructed by Liandri Co. In an attempt to appeal to some of the longer standing participants in the Tournament, it blends the clean, open, and uncluttered flow of Grendelkeep, the need to possess map control exemplified by Compressed, and the sleek technological environment most recently seen in Phobos 2 and Chrome."

This map is aimed at competitive gameplay, and although placement and flow is structured around 1on1 play, it is large enough for 6 players, in the case of a FFA or TDM. I tried to enhance the aesthetics of this map through lighting, as opposed to gaudy meshes. Meshes are used, though are generally kept out of the way of gameplay, and it all results in highly clean and decent visuals, in my opinion.

Go judge for yourself. ;)

I would like to thank NE|ra for the excessive testing on this, and forcing me to actually finish it. I'd also like to thank him for getting Ono of Digital Extremes to playtest it, and give me feedback. In addition, a big thanks to GodsHand for the magnificent skybox he gave away to the community, which I've used herein.

Finally, I would like to thank Epic Games for such a !@#$%ing buggy editor, without which, this map would have been released months ago, and I would not have nearly as much patience or experience, nor would my map be as polished as it is now. Oh yeah, I should thank them for the kickass game, too. ;)

I apologize for sounding egotistical in my level description, I don't truly hold it up among the ranks of Compressed and Grendel, that's just what I was going for. Not sure if I achieved it or not.

Note: The "custom meshes" are really only a few lifts I converted from BSP, and the custom textures are in the skybox, courtesy of GodsHand. The new music is off the Matrix Revolutions soundtrack.