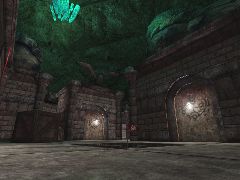 In chambers far below the surface of the planet Ker-Ys, giant shimmering crystals harness the immense tectonic strain, generating the energy which pulses through the arena of a lost civilization.

In many ways this is a fairly basic map, but it's rather fun. The paths are designed so that you really need good cover to make it back to the base with the flag, lest you get cut off by the opposition. This one turned out fairly nicely.