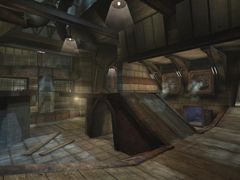 This facility was named after its creator: Lord Balthazar Dima. He wanted to make a factory to produce cheap weapons for his armys. However, the skaarj and the human armys got aware of this facility, and wanted to take it over. The battle for this factory has been going on for many weeks. Who will be victorious?

PRO version: closed the vents on the left of the base, and the small corridor on the right of the base.