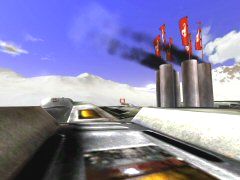 Massive GravGens keep this madman's dream come true arena airborne. The 'guns' themselves are perfect recreations of the originals used in last year's tournament. Head of Liandri's PR departement, given the difficult task to calm the critics, said the memorable words: "Size DOES matter."

-wind sound less annoying (I hope you all agree with me :))

-improved locations (when you hit F1 on your keyboard you can see your location normally, but in the old version I placed too many locationvolumes causing some problems - fixed now)

-lighting highly improved (I know it's just bright and white, but what do you expect high up in the clouds?) causing some weird shadows on the guns to disappear which looks more real and because of that I had to create some new skins for the jumppads (you won't notice the diffirence, which is exactly my intention)

-added a new sound for the jumppads (the ones who played the original first Unreal might recognize it :P)

-botpathing slightly improved (I can't do better right now, since most of the falling problems are obvious like they got shot off or jumped after the ball and not really my fault :))

-improved the skin of the energyshield staticmesh on the center jumppads (the yellow ones, which represent neutral territory), now it's a perfect clone of the red en blue ones instead it's now yellow :) (in the original I used a completely diffirent skins which looked kinda ugly)

-and some more updates you might notice but I forgot :P

Enjoy and this is my FINAL version of BR-BigGuns, but any comments regarding the map are going to be used for my future maps. :)