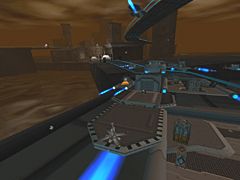 Chase Brians was the cutthroat CEO of LIVE (Lunaer IV Exporting), a mass shipping company that exported mined materials to nearby planets. He then became Mayor of the large port city "Hanger" on a deal with the Risen Dominion that had allowed them to take control of the city quickly and efficiently. But Chase was never a man to settle for what he had when he could get better. He kept contact with Lunaer V's imperial forces behind the back of his new-found allies, and was finally offered a deal he could not refuse: to be appointed Prime Minister of Lunaer IV upon the downfall of the Risen Dominion. However, RD investigations into the possibility of treason within their ranks brought one search party to the city of Hanger and inevitably, to LIVE.

Chase allowed investigations into his operations to go unhindered, confident in the many safeguards that protected his secret. But fate is not without a sense of humour, as part of Chase's own crew rebelled and led the search team directly to a warehouse storing information on the imperial forces that still operated under Chase's instruction. At the end of his rope, the desperate CEO became frantic. He gathered what loyal people he still had and attacked the RD supporters as they were loading the information onto a transport hovercraft. Mass chaos broke out as Chase put the vehicle into high gear and sped towards the nearest launch bay, leaving foe and ally alike to grab whatever vehicles they could to pursue with. In a suicidal rush down the streets of Hanger, Chase's former crew attempted to hunt him down. This mission is a recreation of that scenario.