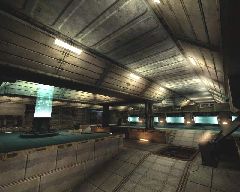 During the height of the Corporation Wars, Liandri scientists created a prototype warship capable of making its own jumps without the need for a jumpgate. Shortly before going into operation, Izanagi spies learned of this prototype jumpship and launched an operation to steal the warship giving the Izanagi Corporation a significant advantage during the Wars. This scenario recreates the historic battle in which Izanagi forces infiltrated the prototype Liandri jumpship, activated its engines and made a successful jump to Izanagi space.

1st revision of Jumpship. I've tested this version on a server running this map for a few hours and didn't have a single crash. So that bug seems to be fixed. Other changes include fixing the particle systems to show up online, removed the grenade launchers, as well as a few other tweaks.