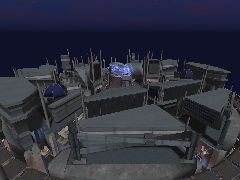 Inspired the Green’s World Rebellion in 2267, miners across several other planets began campaigns to overthrow their oppressive overlords. Lunaer IV was hit hard by such rebellions. However, with aid from nearby sister planets, Lunaer I-V, complete control was regained by 2269.

Devastated by rebel assaults, the capitol city of Cirban was mostly ruins. City planners guided the reconstruction by placing the lower class in the streets with the upper class on the roofs above in an attempt to reinforce the militaristic rule that Lunaer IV enjoys over it’s workers.

Faced by a visual representation of their suffering each day, the “oppressive city” did little but keep the flame of rebellion burning in the hearts of the miners. Conspiracies brewed in the dirty taverns of the slums, and by 2273 the miners held control over a vast, hidden arsenal of weaponry under the united banner of the Rising Class.

Knowing their inability to stop the combined armies of Lunaer I-IV, the Rising Class’ strategists decided that the only guarantee for victory is to stop all communication from leaving the city. Cirban’s Eye, the central power source and base of communications for Cirban, is the one essential stronghold that must be taken in order to stop any signals for help.

The Rising Rebellion, August 3rd, year 2274: Positioned just outside the center of the capitol, the Rising Class has come from across the city to make this one fateful assault on Cirban’s Eye.

Here's some tips (it's always more enjoyable when you know what you're doing):
-The layout is just a big circle. If you get lost, just remember that the objectives are in the center and the conveyor belts (and launch chutes to the upper level) are at the edge.
-When capping one of the control panels, look up! Defenders will hit you from the rooftops if you aren't looking.
-Attackers can hit the final power rods from close outside the building, so only defend inside if someone gets past you.