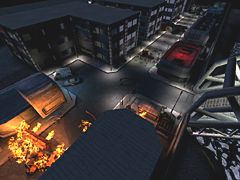 The city of Blackriver has become the victim of a surprise alien invasion. The swarm has overrun the city, and the ISAF Marines have been dispatched to push them back.

However, the aliens damaged the city's air defense system during their attack. The ground-to-air targetting is shooting down everything in the sky, including the ISAF dropships.

Your crew is one of few to survive the crash landing. You must find a working communications station and call an airstrike to eradicate the alien menace; the city is beyond saving at this point. Then you must reach the train station and escape before the bombers arrive. Good luck marine... You're going to need it.