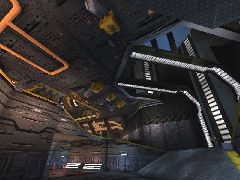 Kenshin is set in a unknown/alien high tech industrial environment. It took me quite a while to plan so it not just plays well but also take advantage of the agility that exist in UT2003. I took care adding the staticmeshes, making sure there're as little juts so there're minimal interferences to player's movement and blocking volumes are in place to lower the chances of such possibilities. The design and construction of this layout is partly inspired by Faceless's seraphim. I use the rules he set for seraphim, and implement them into kenshin, while keeping in mind that this is a 1on1 map. Slowly after much gameplay tests and layout changes, I got the layout I'm pleased with.

The way this map connects allow players to hunt each other down easily. The top floors gave players the best view of the map, but the key to victory is to tour the bottom two levels for powerups. All weapons work extremely well here, even the bio. =P