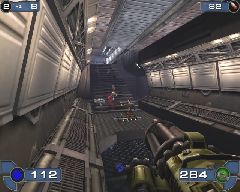 Old school type map with a nice atmosphere of an underground cave with a lake, hence the name Aquifer. It's a bit larger scale than most maps, giving you lots of room for combat. Some people might complain, but I like my maps with room instead of being cramped, so the kills are less lucky. Anyways, enjoy! This map is my first UT2K3 map that I have released. I scrapped many of my first just so I wouldn't be releasing sub par maps. This map had the flow and atmosphere that I desired, and felt like its good enough for all of you to enjoy. So let that be a lesson to you kids, don't release your very first map (unless you're some sort of mapping god, and you first work is as good as anything else out there). You may be impressed that your map looks cool, but play some of the maps that come with the game to compare it to, and you'll probably realize you haven't really made a map worth releasing yet. Just some advice from a mapping veteran (well, that may be a strech, but my 'Ground Zero 2' pack for Half-Life clocked 20,000 downloads on my site alone, so there!)

-The redeemer IS in this level, but you put yourself in danger getting it

-Every weapon is in this game and none are hard to find. This is a personal preference, so everyone can use their favourite weapon in this map.

-Theres a good amount of ammo here, running out of ammo is no fun in deathmatch