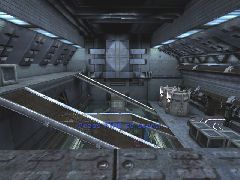 As u probably know, this is the most popular map from UT (and originally from Unreal). I knew there would be many ppl trying to put deck16 into ut2003, and that 99% of them would be really bad and not worth playing. So I decided to make one and see if it played anything like the original. Ofcourse I tried a direct port, but it was too small, un-editable, and pretty awful. So I rebuilt it from scratch (scaling everything up roughly 1.5 times) and now imo it owns :) Most of the old moves are still in here, like the dodge from deemer to the window for example, as well as many new ones.