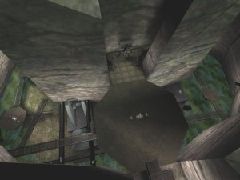 This is a revised version that fixes some major flaws:

1. The huge gap in the terrain that allowed a player to get him/herself stuck under the map has been fixed (yes, it really was bad enough in itself to warrant a re-release :( )

2. The FPS bottoming out at the top of the lift has been fixed.

3. The problem with the health vials in the slime room wherein if you picked up the vials, you would lose more health than you gained has been fixed.