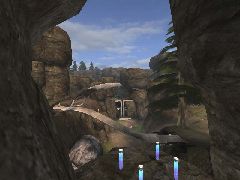 Betalus was a secret training place of the Gen Mo'Kai, to improve their fighting abilities during the Tournament seasons. But due to a misspell of one of the warriors, the place got discovered by the other clans and was forgotten over the years. Recovered by one of the most famous warrior, Betalus became a very popular fighting place for the Tournaments. - This map is designed for fast and furious gameplay for 2-6 players. GL & HF - Soma