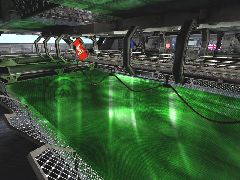 It was the year 2042, a horrible, evil alien came to wreak havoc on the land. A great American leader named NovaBurst confronted the monster with his Shock Rifle. After defeating the alien menace, NovaBurst could not control the slime the alien had left in its rage. He called upon his friend MegaMix, who was a very skilled British builder. NovaBurst had him incase the slime within a state of the art battle arena. This arena would be used to train his clan, ShockProof. This is the arena!