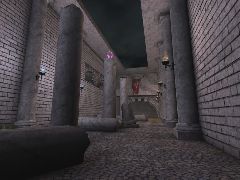 Long ago the Roman gladiators fought for glory. Today, the weapons are different, but the goal is the same. Sick of the glut of Egyptian themed maps for UT2k3? How about a Roman themed map instead? This is my second released map and my first with custom textures and static meshes. While originally designed primarily as a clan map for my standard grav/standard speed instagib clan, it plays well under all of the usual match settings. It's designed for quick, fast fun fragging action with anywhere up to 16 players. The poly-count is low enough that it should run well on most systems. Watch out for the bots.