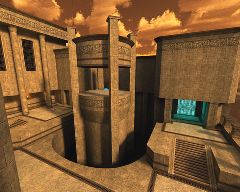 "Beneath a dying sun lies a forgotten planet, long since abandoned by it's inhabitants. The land lies empty and silent and a visitor here will have the rustling of the wind as his only companion.

The legends speak of the Vadrigar - mighty beings from times long past and forgotten. For many aeons they ruled the galaxy, all lesser races trembling before their might and power. Hungry for blood ..." (continued in readme)